Meet the smoking-free, carbon-negative country that passes no law unless it improves citizens’ well-being On the eastern edge of the Himalayas, nestled between India and Tibet, lies the tiny nation of Druk Yul, better known as Bhutan. In Bhutanese, the name means “Land of the Thunder Dragon,” a nod to the violent storms that pound the rugged mountain peaks and flood the lush valleys.Fiercely proud and protective of its traditions, Bhutan has been closed to outside influences for centuries. The nation only opened its doors to tourism in the 1970s and has decided to take a unique approach to westernization, creating a concept known as the “Gross National Happiness Index.”Don’t be fooled by the name. This is not just a measure of how much people smile and laugh. It’s a holistic approach to sustainable development that gives as much weight to human flourishing as it does wealth.“We in Bhutan are very unique; our democracy is very, very unique … in the sense we all are grounded very strongly by our national values,” said Bhutan Prime Minister Dr. Lotay Tshering, who took office in November 2018. “We do not put personal interest ahead of national interest.“When we say Gross National Happiness, it is not the celebrative ‘Ha ha — Ho ho’ kind of happiness that we look for in life,” Lotay explained. “It only means contentment, control of your mind, control of wants in your life. Don’t be jealous with others, be happy with what you have, be compassionate, be a society where you can be more than happy to share.“Our king rightly calls Gross National Happiness as development with values,” Lotay continues. “If the policy does not have a good amount of happiness index, if the policy is not every environment friendly, if the policy will not be able to ensure that it will result in the well-being of Bhutanese, that policy will never be approved in the country.”

The Centre for Bhutan and GNH Studies is responsible for administering Bhutan’s Gross National Happiness surveys. They ask questions such as “How happy did you feel yesterday?” and “How often do you practice meditation?”They measure nine key areas of happiness every five years — psychological well-being, health, education, good governance, ecology, time use, community vitality, culture and living standards. Two surveys have been conducted so far, in 2010 and 2015, with another one due next year.The 2015 survey sampled more than 7,000 Bhutanese from across the country. It yielded some interesting results.“The harder components like living standard, health, access to health or access to education and so on, they’re improving in Bhutan,” said Tshoki Zangmo, a researcher at the Centre.“But the softer components like psychological well-being or the trust indicator that we have in our community vitality domain, those were deteriorating,” she added. “The trust indicator within urban areas in the country, they were deteriorating.”That’s right. Bhutan is not the happiest country in the world. It actually ranks 95th out of 156 countries in the 2019 World Happiness Report. Much of that has to do with the nation’s poverty, and the challenges of bringing economic and social equity to a predominately agricultural society.Much of the rural population relies on subsistence farming in a high-mountain environment that is vulnerable to climate change. Rugged terrain, frequent floods and landslides hinder development; urban-rural connectivity is poor. Television was only introduced in 1999 and there are still no traffic lights in the capital city.“There’s another misunderstanding … that Bhutan has claimed that we’re the happiest country,” said Tshoki. “I don’t think we’re the happiest country.“But what sets Bhutan apart from the other countries is that our vision is clear,” she added. “Our vision is to reach a state where societies have all the enabling conditions intact, not only the economic aspects but the other aspects as well, such as the environment, the community, having access to health and education and so on.”

One only needs to follow 50-year-old Lotay to see the Bhutanese way in action. He exercises daily, but one day is special. Every Thursday he steadily pedals up a steep hill outside Thimphu, Bhutan’s capital city. His goal is the 169-foot-tall Buddha Dordenma statue, one of the largest in the world. His mission is two-fold: exercise to strengthen his body, and prayer and meditation to strengthen his mind. 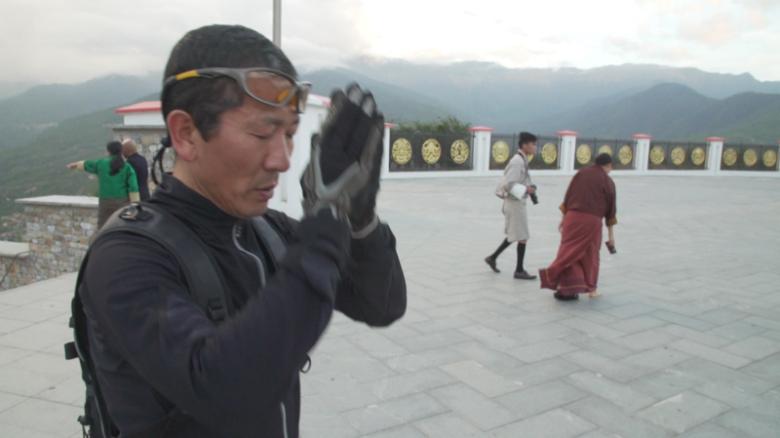 Prime Minister Dr. Lotay Tshering prays outside of Buddha Dordenma.“When we say stronger, it just does not mean the muscle strength,” Lotay says. “It means the mental strength, the strength of your neurons. So those are the ingredients to help your neurons to be very strong.”After his bike ride, the Prime Minister makes his way to the hospital for rounds. As a urologist and surgeon for more than 20 years, being a doctor is an integral part of what makes him happy. Therefore, he makes time on Thursdays and Saturdays to pursue his passion, which just happens to reflect his values. 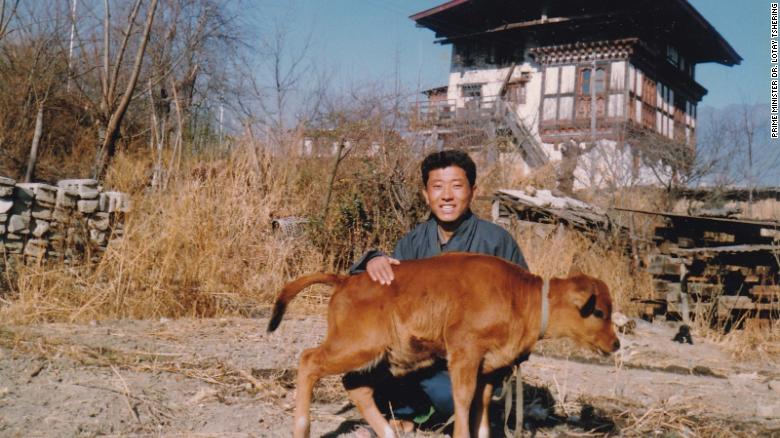 Bhutan’s Prime Minister as a boy on his family farm.“Since I come from a traditional family, I always thought we should help others,” Lotay says. “I thought being religious is the way forward, so on that note I really wanted to be a monk. My mother said why not be a doctor so that you can be really of help to the needy ones and so … I decided to be a doctor.”As he makes his hospital rounds with residents and interns, Lotay tries to instill the same values he has practiced, values he says he tries to bring to how he approaches two of Bhutan’s top goals: universal healthcare and education.“Health and education are the most powerful social levelers,” the Prime Minister says. “So based on that, we have free health and free education in our country. While it is free, it is not easily accessible, easily available for everyone that needs the service. 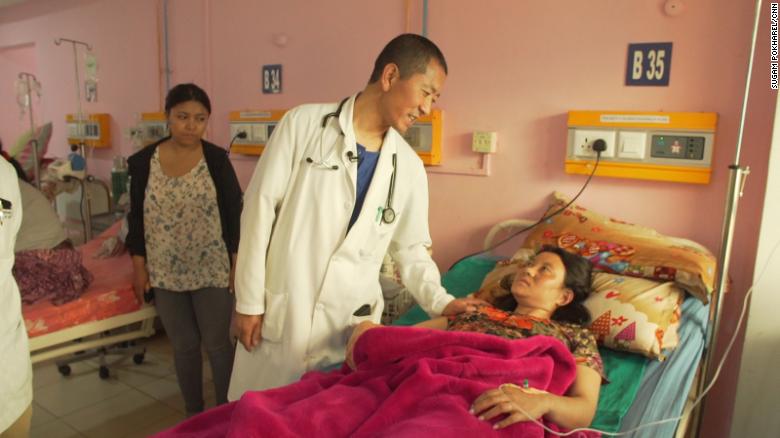 Tshering visits with a patient on hospital rounds.“I thought we could improve the accessibility of health care services to especially the needy ones, those who are based in the villages,” he said, adding that “this pair of hands can only do so much. A surgical blade can only operate a patient at a time.“I joined politics to see mainly if I can bring in some policy changes,” he added, “so that with the stroke of my surgical blade, I treat one patient. With the stroke of a pen I can treat the whole nation.”

The country may not rank highest in happiness, yet, but it has made major gains. Thousand of kilometers of roads have been constructed and phone lines installed. Run-of-the-river hydroelectricity accounts for the largest share of its economy. 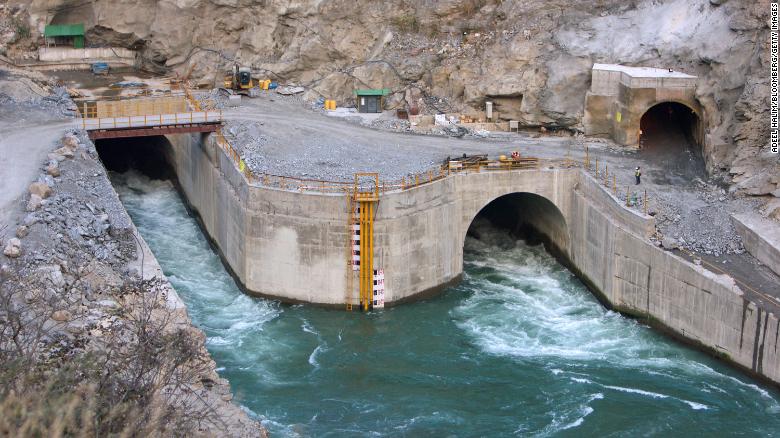 Water flows through tunnels at the site of the Punatsangchhu hydro-electric power project in Wangdue, Bhutan.The World Bank calls Bhutan a developmental success story, with decreasing levels of extreme poverty and improvements in gender equality, as well as a stable political and economic environment.“Just over the last three to four decades our life expectancy at birth has increased from near 50 to over 70,” said Lotay. “With modernization, with decent access to good health care, more nutritious food and health awareness being better day by day, so many Bhutanese now live longer.” 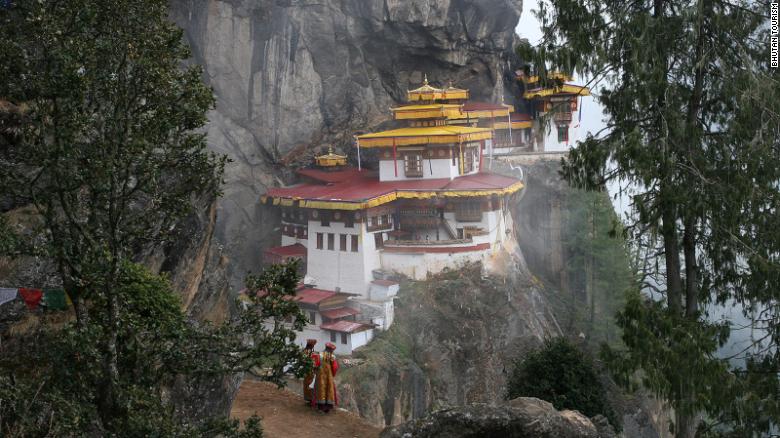 Bhutan places a tight control on tourism, including visits to the Tiger’s Nest, a sacred Buddhist site on a cliffside.Due to the country’s natural beauty and native culture, ecotourism is huge. To manage it within the country’s Gross National Happiness mandate, Bhutan imposes an ecotourism tax of $250 a day per person, which they use to offset the environmental impact of thousands of visitors. It’s been so successful that Bhutan says it’s not only carbon-neutral, it’s carbon-negative.The country has long partnered with the World Wildlife Fund to protect native wildlife in numerous parks. Plastic bags have been banned since 1999. Tobacco has been banned since 2005, making Bhutan the world’s first smoke-free nation. The Bhutanese constitution mandates that at least 60% of the country remain under forest cover. Right now, said Lotay, they are at 70%. 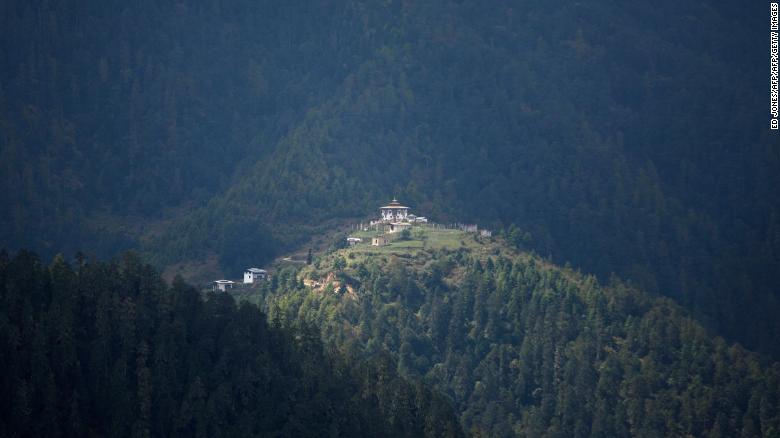 A monastery on a hilltop in the Haa valley, Bhutan. The valley was off-limits to tourists until 2002.Despite the need for economic growth, the Prime Minister is confident those priorities will not change for the Bhutanese people.“When we know that monetary wealth and material wealth will not translate to what you actually want in your life … peace of mind and happiness … then why should we target that as our main objective?“We have to think about the next generations to come,” he added. “So, these are the values of Gross National Happiness that we practice. That’s why economically we may not be doing very well because all those checks and balances will ensure that whatever we initiate will be sustainable, will be for generations to come.”